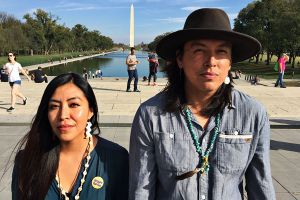 In December, 2014, Senators John McCain and Jeff Flake snuck a last minute midnight rider into a “must pass” bill to fund the Defense Department. This sneaky provision traded 2,400 acres of land in and around Oak Flat, Arizona to a foreign mining company, Resolution Copper (a subsidiary of Rio Tinto) via a questionable land swap deal with the National Park Service in order to exploit copper resources in the area. It is estimated that the companies would earn 10s of billions of dollars in taxpayer assets from the exchange. The rider was snuck in after a nearly decade long battle by state Republicans and Rio Tinto P.L.C to gain access to the coveted high value ore resources located there. Rick Renzi, a former Republican representative was sent to federal prison for three years for corruption for trying to obtain the land in prior land grabs.

Oak Flat is celebrated by local Native American tribes, including the nearby San Carlos Apache Native Americans as sacred land. The Apache Indigenous People have been gathering acorns and performing coming-of-age ceremonies for their young women there for generations. And yet, the news of the bill has remained in a near media blackout, as apathetic Americans assume it is just one more issue raised by disgruntled Native Americans. What most people don’t realize, however, is that this land swap sets a highly alarming precedent for trading National Parks and sacred land to foreign interests. It is an American issue, not just a Native issue.

The state claims that the deal will bring jobs and economic improvements to the depressed Superior, Globe and the surrounding area which has already been extensively mined. The reality is that 75% of the money generated will leave the United States, most of the work will be done by robotics and the extraction method, block-cave mining, will cause devastating and irreversible environmental damage to the area.

On Wednesday, November, 4, 2015, Naelyn Pike made history as the youngest Indigenous Person ever to testify before Congress, along with four other panelists, including her grandfather, Wendsler Nosie, Sr, first democratically elected Chairman (former) to the San Carlos Apache Reservation, and founder of Apache Stronghold. Pike then went on to personally meet with presidential hopeful, Bernie Sanders who is in favor of overturning of the bill. Pike was also supported by Congressman Raúl Grijalva (D-Ariz.), ranking minority member of the committee, by Avaaz, CREDO Action, the Center for Biological Diversity, Sierra Club, MoveOn and over 75% of the nearly 500 Native American nations in the United States.

Congressman Grijalva  introduced H.R. 2811, the Save Oak Flat Act, to overturn the measure and protect Oak Flat from the copper mine. “Oak Flat should be protected, not plundered,” said Nick Kimbrell, a senior campaigner with Avaaz. “Over a million people in the U.S. and around the world are calling on Congress to stop this act of cultural vandalism and set a precedent for governments everywhere to protect Native Peoples and their sacred sites.”

Today, thanks to the multi-year effort by Naelyn, her grandfather and their supporteds, Senator Bernie Sanders (I-Vt.) and Sen. Tammy Baldwin (D-Wis.) introduced legislation to stop this transfer of federal land to a foreign-owned corporation, which plans to develop the largest copper mine in North America!