Ojai Teens Join The “I Matter” Revolution To Save The Environment

Ana Ming Boswick-Singer believes that kids her age should care about the “I Matter” campaign to protect the environment from global warming: because the environment is their future.

Bostwick-Singer is a local Ojai, CA teenager who spent nearly three months co-organizing local teens from three area high schools to create an “I Matter” march of their own. Together with Avery Hellman, she obtained permits for peaceful assembly, fundraised donations, got insurance, recruited teens and musicians and timed their event to take place during a national “I Matter” campaign taking place the week of May 7-15, 2011.

The culmination of their work was showcased in Ojai, CA on Sunday, May 15, 2011 when the teens from Besant Hill School, Thatcher and Oak Grove Schools gathered in Libbey Park. There, they grabbed signs and a megaphone and then marched through downtown Ojai, chanting: “Who Matters, I Matter, We Matter, Our Future Matters.” After the march, the teens played music and enjoyed the day. Bostwick-Singer said: “We are on an one way track to poisoning our water and air, destroying life in the oceans, killing animal species, and cutting down the forests that are the lungs of the earth.”

When Bostwick-Singer first heard the story about how a 13-year-old teenager sparked an activist program to stop global warming via a one-minute video posted on YouTube, she immediately wanted to get involved. Called the “I Matter” campaign, the idea was to get local teens to march to protect the environment from global warming. Said Bostwick-Singer after learning about the “I Matter” campaign: “I feel passionately about the degradation of the environment. I didn’t want to just sit in my room and do nothing. Why sit when you can fly?”

Organizing campaigns such as this comes naturally to Bostwick-Singer. After all, her family were activists during the Civil Rights Movement and the Vietnam War. They encouraged her to participate.

Bostwick-Singers hopes the march she helped to organize in Ojai provided a good example of positive spirit to inspire others from her generation.

My photo, entitled Our Future iMatters! covering Bostwick-Singers work appeared in the May 20, 2011 edition of the Ojai Valley News. 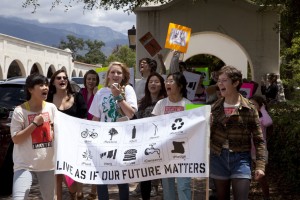 Photo of the iMatter March in Ojai, CA. ©2011 Victoria Linssen