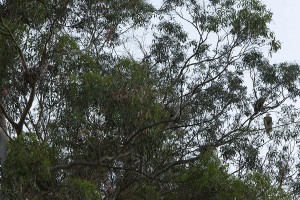 In June of 2007, the Department of the Interior removed bald eagles from the Federal List of Endangered and Threatened Wildlife and Plants. Still protected by the Migratory Bird Treaty Act and the Bald and Golden Eagle Protection Act, it’s estimated that the bald eagle population has grown 10-fold to nearly 10,000 mating pairs. Bald eagles build their nests in high locations in trees near coasts, rivers and lakes On Wednesday, June 20, 2102, a bald eagle was spotted hunting near Lake Casitas. (Photo by Victoria Linssen © 2010 – 2018)

This entry was posted in .